The Madison Regatta is fast approaching as events surrounding the Madison Regatta Festival are starting to begin around the community.  In terms of racing, the Dennis Holt Memorial Regatta for RC and model boats serves as a nice kickoff for Regatta week.  I made my way to Kruger Lake on Jefferson Proving Grounds today, although I didn't stay long due to other commitments and the fact that it was almost unbearably hot today and there wasn't much shade around the lake.  Anyway I was able to get a few nice pictures and here they are: 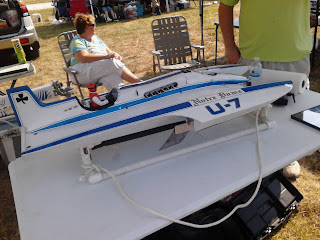 A replica of the early 1970's Notre Dame boat.  This boat competed in the 1/8th scale class 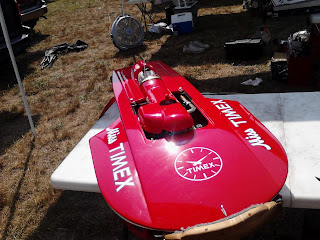 A replica of the Miss Timex, which of course was owned by famed Miss Madison Driver Jim McCormick.  This boat competed in the Thunderboat class, although it struggled to get up to speed. 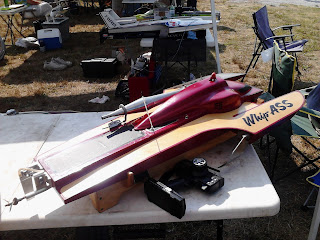 The Whip Ass, and no there has never been an Unlimited to race under this name.  This particular class of RC boats actually uses weedeater engines 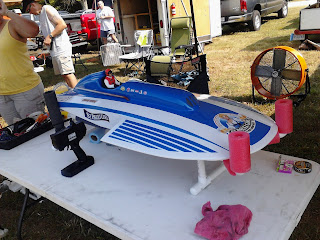 Another Thunderboat Class Boat.  The St. Pauli Girl.  There never has been an Unlimited to be sponsored by St. Pauli Girl, but I wish there would be, as it's one of my favorite beers 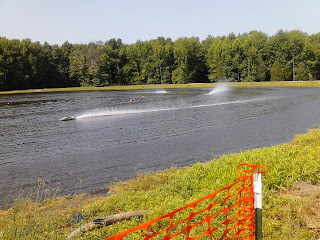 As can be seen on this pic, all RC boat races at this event were ran in a clockwise format. One interesting thing about RC boat is they don't have the same overlap rules as exist in the Unlimited class.  Coming off the first turn, boats will often bump each other or cross each other's path in order to grab the inside lane.  In this picture, you can see the boat swing wide in the turn then dive to the inside coming out of the turn, which I personally enjoyed seeing because it's a move I've done often in playing Mario Kart. 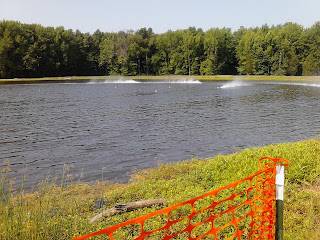 Some action from the RTR (Ready to Race) class.  This class is intended as a "beginner" class, as people can buy these boats online, and they will, as the name suggest, be ready to race the moment they are pulled out of the box.  One thing I found interesting is that the paint schemes of this class ranged from one solid color to boats that could almost pass as scale replicas of some Unlimiteds.  Although it is meant as a beginner class, many of the competitors also had boats entered in other classes of racing. 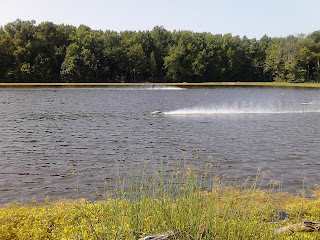 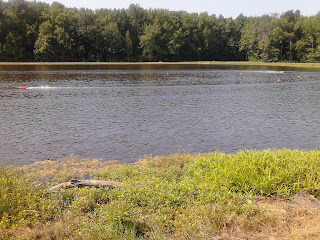 Tunnel boat action.  Much like their larger manned counterparts, Radio Controlled Tunnel Boats are smooth riders who are extremely quick through the turns.  The red boat was running away with this heat, but then blew over on the front stretch of the last lap 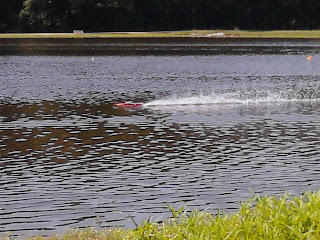 This is an interesting class of boats.  The Unlimited Hydroplane they most closely resemble is the failed Pay N Pak "outrigger" hydroplane.  The boats are very quick but also very volatile.  During this heat two boats saw their nose dig into the water and the boat turned over.

All in all, the local RC Boat Club put on another great show.  The crowd was a little down this year, but that is to be expected with how hot it was and perhaps because the NASCAR race at Kentucky Speedway (about an hour from Madison) was also this weekend.  I wasn't able  to get any pics of the 1/8th scale or Thunderboat classes, but they had some great races and the Thunderboat class saw a spectacular blowover with a boat getting a good seven feet off the water.  Thanks to the people who helped put this race on and also thanks to the participants of this event, who were more than glad to show off and answer questions about their hard work.  Regatta week is here!

Gold Cup For Sale: Remembering the years of the Gold Cup being hosted by the highest bidder

The Return to Coeur d'Alene

Diamonds truly are forever, they just get put on a shelf for a few decades sometimes.

News broke this past week that there are plans for a five boat exhibition in Coeur d'Alene, Idaho for this coming Labor Day weekend, with the hopes of having a full race starting in 2013.  This will be the first time the Unlimiteds will race on Coeur d'Alene Lake since 1968 and is certainly welcome news for longtime fans of the sport, especially in the Pacific Northwest.  Coeur d'Alene held its initial run of Unlimited races from 1958-1968, and became memorable to fans as a race that represented a certain era of racing and the boats, drivers, and personalities therein.  Coeur d'Alene was to the 1960's what Owensboro was to the 1970's and Honolulu was to the 1990's in that the race site was popular with fans and people within the sport for a decade, but for differing reasons the stability of the race site began to unravel and was taken off the schedule.   A nice recap of the first run of Diamond Cup races by Bob Senior appears on Leslie Field's website (I can't make a link to the story on here for whatever reason, but go to http://lesliefield.com/default_frame.htm and put "Diamonds Aren't Forever" in the search to read the story).
Nostalgia no doubt has played a big role  in the organizers' pushing for a return of the Diamond Cup, this is especially true when one considers that the same committee has recently organized vintage exhibitions on Coeur d'Alene Lake.  Because of this, the exhibition and hopefully the future race in Coeur d'Alene, Idaho will have a lot of nostalgia and will almost have the feel of a vintage race of its own although it will obviously feature modern boats.  If the race does take place, the Diamond Cup race could also represent a nice balance to the international expansion.  For me, the fact that the sport is growing globally is great, but so is the fact that the sport hasn't abandoned its roots in places like Madison, Tri-Cities, and hopefully Coeur d'Alene.  As Sam Cole noted in the press conference announcing the return of the Diamond Cup, hydroplane racing has its roots in the Pacific Northwest, so hopefully this race will show the sport is staying true to its roots as it continues to grow.
As with anything that comes to Unlimited Hydroplane racing however, I'm approaching this news with cautious optimism.  It isn't any secret that exhibitions or promises of races have come up dry when it is time to have an actual race.  Just last year exhibitions were held in Sacramento and Washington, DC with promises of a full race in 2012 and neither of those came to fruition (although there is a chance that both could be on the schedule for 2013) and the Houston race site seems to be all but abandoned.  Still, the Coeur d'Alene site seems to be built on a strong foundation and it's good that American locales are once again showing interest in bringing the Unlimiteds to their city.  Here's to hoping that Coeur d'Alene Lake will once again become a regular stop for the Unlimited Hydroplane tour.

As a sidebar, Thunder The Bridge celebrated its one year anniversary last week.  I would like to thank everyone for their positive feedback when it comes to this blog.  This is literally something that I just decided to start one day and it has taken off in ways I couldn't have imagined.  So thanks to all of you for reading this and making the first year of the blog so fulfilling.  In the next couple weeks I'll be writing a few more pieces in relation to the upcoming season along with a full season preview as we get closer to the start of the season.  Stay tuned.
Posted by Aaron Lynch at 3:08 PM No comments: